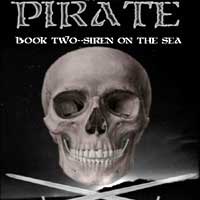 Pirate Book Two: Siren Of The Sea
Amity O’Malley may have just met her match. There’s another female pirate on her ocean, snapping up men right and left—including Amity’s twin brother Trevor, and her shipmaster Darick. Amity is now being blackmailed for a priceless piece of the O’Malley family history, and she would rather die than give it up—especially to a blonde American with a ship bigger than a bloody island. Enter Nicholas Thatch, an eleventh-generation pirate with a sketchy history and an immunity to the siren’s song—and Amity’s famous temper. He appears out of nowhere, informing Amity that he is related to Blackbeard and just as fierce. He shows up with a sword, a cheeky grin, and a piece of paper saying he is going to marry Amity, ordered by both of their fathers before the two of them were even born. Amity wants to throw him overboard the instant he appears on her ship. Except—he’s the only one who knows how to defeat the siren, and she needs his help. She reluctantly enlists him to help her get Trevor and Darick back, and she ends up paying a price she never thought she would have to pay.
Buy Pirate Book Two: Siren Of The Sea