Pirate Book One: The O’Malleys

Pirate Book One - The O’Malleys 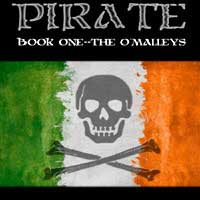 Pirate Book One: The O’Malley’s
The word ‘amity’ means friendship or peaceful harmony. Not bloody likely. Amity O’Malley is anything but peaceful or harmonious. Descended from a famous female pirate, and containing Irish Fae blood, she is not only a good pirate, but the best there is. You don’t want to cross her; her weapons and strength are unmatched by any on the North Atlantic, and the high-tech Achrann is the most powerful ship sailing the seven seas in this century. She’s got (too much) whiskey, a sharp tongue, and plenty of power. She is almost invincible. Then her twin brother Trevor decides to show up again and ruin everything. The sibling rivalry is enough to make their poor mum turn over in her grave, but a tragedy forces them to stop fighting to get rid of a common enemy—before they lose everything, including each other.
Pirate Book One: The O’Malleys